This is the last OPIDIN bulletin of 2019. The flood at Mopti has reached its highest level (640 cm) on 26 October and has started to decline, but further downstream the water still goes up. OPIDIN predicts that the flood will reach its peak between 18 and 22 November in Akka and between 27 November and 5 December in Diré.

The last dozens of years, cows were allowed to cross the river at Diafarabé during the course of November. That will not be possible this year, since in November the floodplains will still be covered by water. In 2019, the floodplains in the southwestern part of the Inner Niger Delta will become available for grazing in the last week of November. 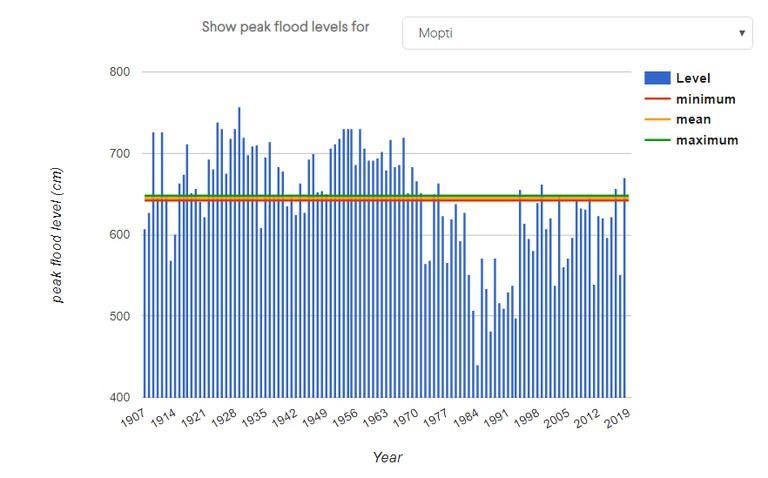 OPIDIN predicted on 1 August that the flood in 2019 would be relatively low (about 540 cm in Mopti), a prediction being based on the relatively low water level in Mopti on 1 August (300 cm). The water level raised fast in August, even more than two meter in one month. There was so much rainfall in the Upper Niger in early August and then the water level at Mopti increased so fast that OPIDIN upgraded its prediction of the peak flood by one meter cm in the first 10 days of August. Since mid-August the daily prediction remained at a same level (between 600 and 660 cm), being around the actually measured peak level (640 cm). The graph below shows the increase of the water level in Mopti (blue line) and the daily prediction of the peak flood level (yellow line). 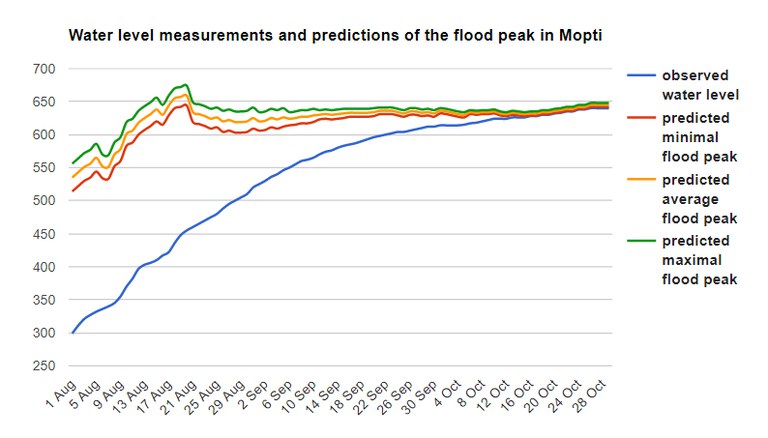 The predictions of OPIDIN are based on data collected in the past. For instance, when the water level in Mopti has increased to only 300 cm on 1 August (as in this year), it is obvious from previous years that the flood will likely not be (very) high. Comparing different years, OPIDIN calculates the probability that the flood peak will reach a certain level given the observed water level in Mopti on 1 August, it does the same for the water level reached on 2 August, 3 August, etc. The daily prediction could further be improved by adding in the model the rainfall in the Upper Niger during the preceding three weeks. The prediction can never be very accurate, however, certainly not in the first half of August, because the flooding of the Inner Niger Delta river will deviate from the prediction depending on the rainfall later in the season. This year, the rainfall before mid-August was below average, by which the prediction of OPIDIN in early August arrived at a peak level being somewhat too low. Another year, it might be the other way around. These deviations cannot be prevented, unless the future rainfall for the next two or three weeks might be predicted accurately and integrated in the model. That is not likely, but there is still another, more feasible, option to improve OPIDIN. OPIDIN is now based on the daily measurements of the water level in Mopti, a station being chosen because it is the first one after the Bani tributary  has merged with the Niger River. There are several hydrometric stations along the Bani and the Niger upstream of Mopti where the water level is daily measured by DNH. The possibility to use these data instead of, or in combination with the measured water level in Mopti, will be investigated coming months to know whether in this way the flood peak may be accurately predicted earlier during the course of August.

Apart from the weekly bulletins which are broadcasted on the local radio stations, OPIDIN is available as website. The OPIDIN website was launched in June 2013. The number of visitors reaches each year its peak in July-September, which was to be expected assuming people visit the site to know the predicted flood level in the months before the actual peak is reached in October - November. For the same reason, OPIDIN is less often visited between October and June.

It took some time before the website was found by the potential users. Comparing the month September, the number of visits increased from 155 in 2013 to 1212 in 2019. So far, the OPIDIN site had 30,585 visits. When the visitors are split up per country, there are still more visitors in Europe or the United States of America than in West Africa.

Until 2019, 96% of the visitors used a desktop and not more than 3.5% a smartphone and 0.6% a tablet. This has not much changed during the last six years. A further increase of mobile users is to be expected as soon as smartphones will become more generally used in Mali.