The Inner Niger Delta is a floodplain ecosystem with a flood-dependent economy. Since time immemorial the seasonal flooding of the delta is the driver of economic and cultural activities in the delta. Fishermen, pastoralists and rice farmers know this by heart. The adaptation of their daily life to the height and behaviour of the floods is rooted in their culture and traditions.

When the floodplains during the deflooding become accessible to livestock, the farmers still have to harvest their rice. Yet, herders have an interest in arriving as soon as possible on the emersed floodplain because the quality of aquatic plants decreases within weeks as the heat scorches the vegetation. Obviously, farmers do not accept cows entering their rice fields and eating the rice crop before harvest. The Dina, the law introduced by the Peuls in the 19th century, offered a compromise in these conflicting interests. Although the Dina lost its importance during colonial time, it was decided at a meeting in 1966 to re-establish the Dina with regard to grazing of cattle in the Inner Delta. In the modern version it is not the Dioro but the Gouverneur of the Mopti region who coordinates the different parties.

The annual meeting of stakeholders seeks to determine when cattle is allowed to enter the different zones in the Inner Delta. This meeting takes place in early October, thus still during rising water, so that the ‘calendrier de déplacement’, also known as ‘calendrier de traversées’ or ‘calendrier de la campagne des bourgoutières’ can be ascertained based on the expected date that the floodplain becomes available. Thus, an OPIDIN avant la lettre.

The herders and their cows need to cross the river during the deflooding. There are 32 frequently-used crossings. The river-crossing is celebrated each year. Popular festivities are, for instance, ‘Jaaral jafaradji’ at Diafarabé (see photos) and ‘Deggal diali’ at Dialloubé. The date at which cows are allowed to cross the river differs for the various official crossing-points. Because the floodplain in the southeast becomes available in advance of the floodplain in the central Inner Delta, access is already permitted in November in Diafarabé. Between 90 to 110 days later, the area near Lac Walado-Debo is opened for grazing. 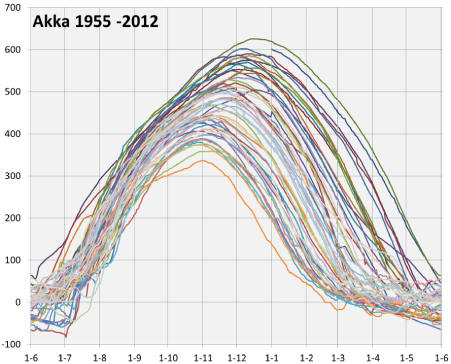 The variation in water level (cm) in Akka since 1955 between 1 June and 1 June the next year. After a high flood the floodplains at 200 and 100 cm are emersed early and half May, respectively, but when the peak flood has been low the same floodplains are already dry from January onwards. 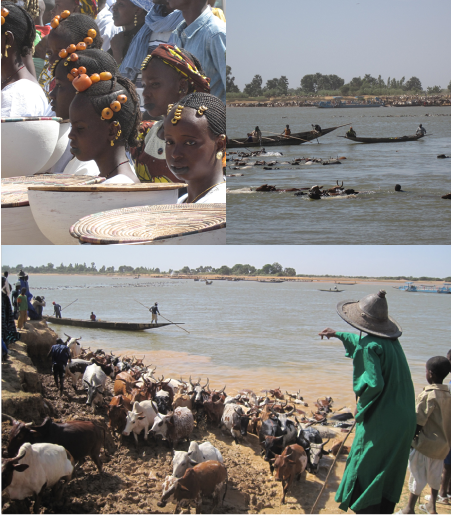 The entry dates vary between years (see table). After the low flood of 1984, cows were allowed to enter the floodplain around four weeks earlier compared to the high flood of 1994. The technical report (see download & links) compares the water level at Ke-Macina near to Diafarabé at the dates of access since 1980. The variation is large, either because the stakeholders negotiate each year fanatically about the calendar or because they are not able to do a more precise prediction of the date at which the floodplains are accessible to livestock. OPIDIN might help them to arrive at a right decision.